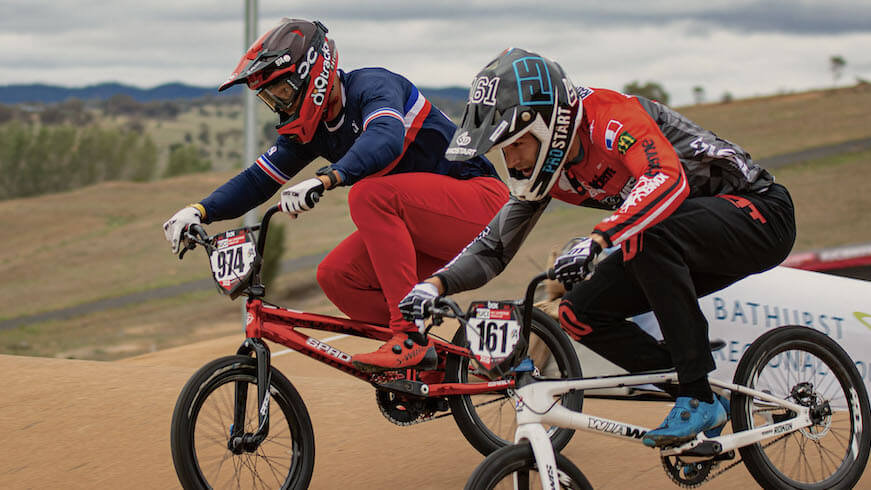 Your heart beats for BMX riding, you just don’t dare to start? Read all the info for BMX newbies here. Plus fun facts that you definitely didn’t know yet!

What does BMX actually stand for?

The most important thing on your way to becoming a BMX pro? That you have the answer to the question “What does BMX actually mean? Which is: BMX is the abbreviation for Bicycle Motocross – the X stands for “cross”. Motocross is the combination of Motorcycle and Cross-Country. So the written out name points to the origin of this cycling sport: BMX riding has evolved from the mountain bike scene. Professional world championships have been held since 1982. In 2008 BMX became an Olympic sport, there are races and freestyle competitions.

Who invented the BMX bike is difficult to trace today. The first BMX originated in the 1960s in the USA. Motocross races were so popular there that teenagers built their own racing machines – albeit unpowered. The precursor of BMX was the Stingray bike, which also gave rise to the Bonanza bike. In the mid-1970s, the wave then spilled over into Europe, and a new cult sport was born! Speaking of which, the Netflix series Stranger Things sparked a revival in the U.S. as well as in Europe since its release in 2016, as the main characters jet through the fictional small town of Hawkins on their BMX bikes.

What is a BMX bike?

A BMX bike has a relatively low frame and relatively high handlebars that rotate once around themselves. The wheels have a diameter of only 20 inches. Riding on it for long distances on the road? No, thanks! But is also not the point! Because you either want to ride down a racing course or jump tricks. Here’s how you can tell in a flash whether a bike is designed for tricks or for speed: A BMX bike with wide pedals and pegs – two bars attached to the right and left of the front and rear wheel – is a trick bike.

How big and how heavy are BMX bikes?

BMX bikes weigh between 8 and 15 kilograms, depending on how many attachments it has and what material it is made of. In relevant forums, BMX riders advise choosing a bike around 10 kilograms as a beginner. Frame sizes can also vary. For kiddies up to 1.10 m tall, there are so-called micro bikes with a top tube length of 16 inches. This is followed by the up to 17.5 inch Mini (up to 1.30 m), then the Junior – up to 18.5 inches for kids up to 1.50 m tall. Larger children and adults choose BMX bikes between 20 and 21 inches top tube length, depending on height, weight and what you plan to do with the bike.

Learn to ride BMX: What is important

If you want to learn BMX and now ask yourself: What do you need to ride BMX? Then you should first of all look for a few like-minded people! Unlike “normal” sports, BMX is not organized in classic clubs. You can often meet BMX trick riders at public places that are suitable for jumps or other tricks. Also have a look at skate parks. Of course, you won’t find the racers on the asphalt, but on BMX tracks, for example in larger parks or on the outskirts of the city. Try them out a few times and see if you enjoy the sport. Only then is it worth investing in it. BMX bikes cost between 200 and 1000 euros – depending on how high your demands are.

Once you’ve found your BMX crew, it’s time to build your own bike. Get advice on buying a frame and wheels to make sure you choose the right size. Attachments such as handlebars, pedals, brakes and hub also need to be considered. You can choose between the classic cassette hub or the so-called freecoaster: With a freecoaster you can roll the bike backwards without the pedal cranks running. Depending on what tricks you want to do, this can be very handy! BMX bikes are also available as complete bikes, which means that you already have the handlebars and wheels and don’t have to put together a bike.

How dangerous is it to ride BMX?

BMX is about as dangerous and injury-intensive as skiing or skateboarding. Some people ride the slopes or halfpipes for years without anything happening to them. Others go down a small ramp and end up not as planned, but right in the hospital. In short, how dangerous the sport is depends on your willingness to take risks and your luck! However, you should always wear a helmet when riding BMX and use knee and elbow pads, especially in the beginning.

Many tricks in BMX riding build on each other. Therefore, the following basic tricks are important to know – and to be able to do:

YouTube is full of tips on how to learn even more BMX tricks.

You are looking for role models, i.e. talented (and famous) BMXers? Here comes a small overview:

US-American Mat Hoffman, born in 1972, is one of the BMX pioneers. Halfpipe and quarterpipe were his specialties. He jumped several world records in height, therefore his nickname is “The Condor”. Mat Hofmann is considered the Tony Hawk of BMX – like the skateboarding legend, he is also the namesake for a computer game series: Mat Hoffman’s Pro BMX.

Luis Brethauer, together with Maik Baier, was Germany’s first Olympic BMXer in 2012 and in 2013 became the first German BMXer to win a medal at a World Championship. The seven-time German champion competes in sprinting, so he is a BMX racer. On his Instagram channel, the 1992-born sports soldier shares videos of his races, pictures of his bike, and impressions of his BMX riding career.

The US-American Nina Buitrago (*1981) is one of the most famous BMX riders. She is at home in the halfpipe, but also loves the dirt discipline, i.e. riding cross-country through a mound course. She was the first woman to grind (i.e. slide) down a staircase railing on a BMX.

Nicole Kidman on a bike and other fun sport curiosities.

BMX
Flashlights on a bicycle are an indispensable thing and directly affect safety, we explained

BMX
Anyone who wants to shine with spectacular BMX tricks must first master the basics.

BMX
For every age or body size, there is the right race bike. The frame

Outfit
Cycling is becoming more and more popular nowadays, but still many cyclists do without